MwGh case 4311
​
Private residence Springfield, Missouri
This walkout basement home features 3 beds,  2 bath  1,242 square foot, 30,056 square foot lot and was constructed in 2007. The owner of this home has reported aggressive behavior including hearing apparitions coming up the stairs and down the hall, hearing voices, seeing a figure wearing a brimmed hat and even once called the Springfield Police Department who approached a room in the basement where they heard sounds of a disturbance with weapons drawn only to realize that they had cornered nothing at all (police report for this encounter is on file).

This home is situated in a normal suburban neighborhood with no outstanding records of significant crimes or traumatic deaths in the recent past. However it is important to note that the Trail of Tears does geographically run through the back of the property of this home. It’s also important to note from a paranormal investigation standpoint, that renovations are currently underway in the basement area (renovations have been historically shown to bump up paranormal activity in areas prone to such activity. It’s also important to note that this homeowner has experienced paranormal activity in a prior home she has lived in in Alaska.

More than 16 hours of audio, video and photos were capture during the investigation. Every room in the home was investigated with emphasis on the basement spaces. The Central Air system was disabled as well as attic fan and open windows were closed to eliminate contamination of audio evidence. EMF/K-II detectors and digital voice recorders were placed in all locations to capture possible paranormal evidence.

We always feels it is important to highlight that "debunking" does NOT equal "not believing" the clients' claims. Debunking allows us to perform our own "checks and balances" ensuring that any evidence collected could NOT be repeated via natural means; debunking simply means that a natural explanation for the claim exists, whether or not it is the actual cause....when a natural (easily repeatable) explanation is discovered, we consider that claim categorically "debunked" because it's the claims which we cannot repeat with natural means that pass the filter of paranormal.

Given the more aggressive claims of this property we were unable to debunk many if not all of these claims. We did notice a small refrigerator in the basement area which will occasionally emit some clicking sounds but it’s unlikely these would be heard from anywhere else in the home and were very obviously mechanical in nature.

The owner of this home has 3 dogs and at one point during the investigation, all 3 investigators were sitting in the upstairs living room performing an EVP session then after a while decided to move back downstairs where more sounds had been heard with the naked ear so we asked any entities present to make some noise or move something upstairs while we were downstairs.  While investigating downstairs, we heard our recorder which was placed on the coffee table beep three times (indicating the audio had been manually stopped). When we came back upstairs, not only was the recorder now in the "off" position, but we noticed something that seemed different in the living room than when we had left which can be seen in the picture below. 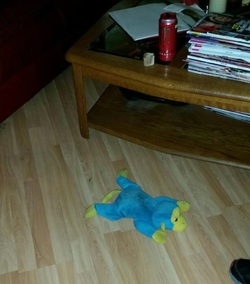 This dog toy was prominently placed in the middle of the living room floor. We all noticed it as
​    seeming like a new addition so we went back through all the photos that were taken during our
​    upstairs EVP session and found the picture below. It is positioned on the "north side" of the
​    table. 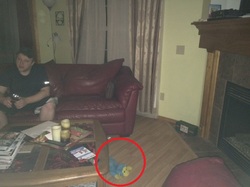 ​   We were relieved to find that we had captured a picture of the toy but when this pic was taken
​   (right before we went downstairs) the toy was completely on the other side (or the "south side")
​   of the coffee table. It’s important to note that no investigators touched the toy and none of us
​   even went between the table and the fireplace. We also checked and if it had been accidentally
​   “kicked”, it’s too big to go under the table. The only way it got to its resting place was to go all
​   the way around the table.
Audio Evidence

This audio was captured in the basement; at :09 you'll hear a knocking sound and Tyler says "what is that?" then at :13 you can hear what sounds like an exhale or something similar. The link to this audio on SoundCloud is below.

Later during the investigation, Chris and Ty started discussing "Amityville horror" and Chris was describing the basement scene in the movie just goofing around. At :16, you hear a voice that says something like "tasty". Or something with a hard "T". That audio can also be heard below

During this EVP we were asking some something to be audibly moved or for some noise to be made in our proximity. At :07 Chris says "were not sure we've heard you" then at :09 you can hear something being tossed behind us. We examined the area and compared to pictures but there were so many small items in that area it was impossible to detect which were out of order. There was a small, plastic piece of an electrical outlet which was part of the construction that was off in a corner on its own.

Conclusion(s)
​
All of us at Midwest Ghost Hunter do believe that there are paranormal issues in this home (paranormal = “above the normal”). We cannot say 100% that there is a ghost or ghosts haunting the home, we are limited by the evidence we have collected. But we have sufficient evidence to say that we were not able to explain these experiences rationally. We will continue to keep this case open.