The owners of this home in Southwest Mo asked us to perform an investigation of their walkout basement home. There are 4 adult
residents and one 2 year old child currently living in this rural home. Every member of the family and even guests have reported seeing, hearing or in some cases even feeling the entity who shares the home with this family. Claims include hearing breathing, growling, knocking, & footsteps and many have even seen the shadowy figure moving through the home or standing at the foot of the bed. This presence has shown a particular interest in frightening the young child who lives in the home which is why we made performing this investigation a priority. It's important to note that the homeowners have been remodeling the interior of the home and while digging a swimming pool in the backyard, discovered an unidentified artifact which some had incorrectly told them may be a stone cannonball (pic below, click to enlarge). This stone artifact was placed in the middle of the upstairs living room for the entirity of the investigation. 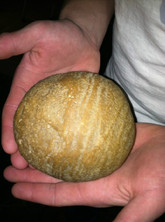 After conducting hours of research into exactly what this item the homeowners found (and brought into the home) may be, we finally discovered that it is not a cannonball at all. This is an authentic Osage Indian tribe grinding stone (like the one pictured to the right) which is interesting since the Trail of Tears the Osage tribe took to Oklahoma passed right by the area where this home sits. A stock photo showing how these grinding tools were used by the Osage Indian tribe is shown below. The stone "pan" has yet to be discovered. 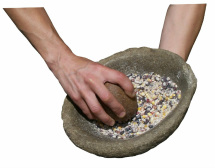 The photo below was taken when some shuffling sounds were heard at the  top of the stairs and it appears to show the silhouette of a figure at the top of the stairs. It's interesting that the possible "figure" does not cast a shadow on the picture hanging on the wall (the item in the middle of the photo). This being a shadow of the picture-taker has been ruled out as this was taken from bottom of stairs to top (approximately 12 feet up). (click to enlarge) 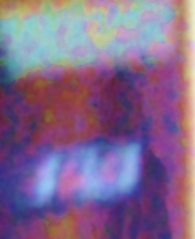 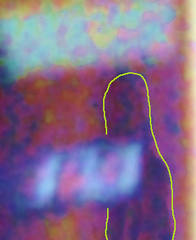 This first EVP was captured in the basement of the home. Chris can be heard saying "where can I put this?" and the recorder is
placed on the arm of the sofa. Chris then says "say your name....say ANYTHING". At this point, you can hear a voice whisper "anything" followed by a full sentence that has been debated among several of our "ally" groups, but with no final determination. At the end of this recording, you can hear breathing (we have video confirmation that no investigators were near the recorder at this
time. This audio was not picked up by video recorder. You can hear the EVP here  or below.

Several hours into the investigation, all team members took a break and exited the home. We left the artifact described above in the
middle of the living room floor, placed a flashlight (with slider on/off) on a baby high chair with audio recorder next to it. We asked the entity to make itself known during our recess either by turning on the flashlight, speaking into the recorder or by appearing on the video cam. When we returned inside 17 minutes later, the flashlight had been turned into the "on" position and the camera in the room had been switched to the "off" position and laid over on its face (this was a chunky cam that wouldn't just "fall" over on its own, we
tried!). Upon evidence review we discovered this EVP (posted below) which clearly states "go home" followed by a sound which we
can't explain. The homeowners stated it sounded like the child's toy vacuum cleaner being turned on (child's toys turning on spontaneously was also a claim). Upon returning to the downstair area, we discovered that this camera had also been turned into the "off" position.

EVP #1 - Investigator says "say your name, say ANYTHING"....followed by whispered "anything" then unitelligible speech. Near the end, breathing can be heard (which is one of the claims of the home owners). We have video confirmation that no investigators
were near the device when this EVP was captured.

EVP #2 - 12 minutes into the 17 minute "break" with no one inside the home, this EVP was captured where a voice clearly says "go home" followed by a sound which has yet to be determined (no items were desheveled or out of place upon re-entering the
residence). This is a class A EVP that requires no enhancement, however the sound that follows remians a mystery and was not produced by any of our equipment.

Upon conclusion of this investigation (this residencehas been investigated by another local group who also captured evidence) we
determined that the entity in the home was an attention-seeking human entity, not the more harmful non-human type, and that this 'spirit" is possibly attached to the artifact which had been brought into the home. The homeowners were provided with instructions for respectfully replacing the grinding stone (via Osage tribe elders) and have reported that paranormal activity has ceased, but
this case remains open to possible future re-investigation if activity ramps back up.