The occupant of this home in Bolivar, Missouri states claims ranging from seeing shadow figures moving (she AND her dogs) to hearing her name spoken by a child. The most intriguing claim is that of a "rotten" smell that moves around through the home. The claims from this home are lengthy including disembodied voices, footsteps, figures, moving objects, "the smell", dogs tracking objects across rooms, etc.

The history of this home is uneventful. It is a suburban, one story home built in 1974 with no reports on record of any major crimes occurring there. The unique aspect of this home is that once again (like the other home we investigated in Bolivar), all the doors inside the home including bedroom and bathroom doors, had chain locks on the outside. The client stated that several of the items in the home were retrieved from an elderly male neighbor who had died, including the cedar chest and dresser in the bedroom and a few of the large appliances.

More than 19 hours of audio, video and photos were capture during the investigation. Every room in the home was investigated with 6 digital voice recorders, multiple still and video cameras, EMF detectors, laser grid, thermal detectors, Frank's Box and trigger objects. We collected most of our evidence in the master bedroom (where the chest and dresser are), hallway and living room. We were able to detect the "rotten" smell which the client claimed several times and found it impossible to track. At one point, we thought it was coming from a return flow ceiling vent in the ceiling of the hallway, then it would quickly move to the living room and disappear from the original source. Every time we were tracking the scent, we were able to collect an EVP (all evp's, video and pictoral evidence are below).

Midwest Ghost Hunters always feels it is important to highlight that "debunking" does NOT equal "not believing" the clients' claims. We actually find a great deal of pleasure out of debunking claims because it can help relieve the clients' fears. However, with this case, we were able to debunk only a few of the claims. The first was the sound of walking in the kitchen area. We found that the flooring in that area has a recoil where after the floor boards are walked up, several seconds later, they return to original length and make a "popping" sound which could be mistaken as the sound of footsteps in that area. The other was the very outdated electrical wiring. At one point, the two investigators in the home (Chris and Ty) went to garage to investigate and returned to discover that the lights in the kitchen/dining room area had been extinguished. We later discovered that this is due to a poor connection in the switch on the wall. We also experienced blinking lighting in the hallway which was, again, due to the old wiring. At one point, we heard a distant neighbor outside smoking a cigarette and were able to clearly hear him coughing (appropriately, unfortunately) inside the home. We were surprised that the home is well insulated from EMF, though. Even the major appliances such as microwave, refrigerator and television only emitted a small amount of EMF and it didn't radiate further than a few inches from the source.

This audio piece was collected with Chris and Dustin in the master bedroom sitting on the bed (same room where cedar chest is). We had heard some shuffling nearby and asked "are you in here?". We were able to clearly hear the response with our naked ears and our DVR also clearly captured this response which can be heard HERE.

Later, while tracking the "rotten" smell throughout the home (it moved from one place to another very quickly), our investigator Tyler was standing on a chair in the hallway tracking the scent to a return flow ceiling vent. When this EVP was captured, he saw a shadow figure move quickly in the hall which prompted his startled response. The full EVP can be heard HERE with the audio in question occurring at :12.

With investigators in living room, this EVP was captured with DVR sitting near the hallway (where the previous childish sounding EVP was captured). This is another very clear EVP. after John says "would you like 2 of us to go to the bedroom again?" you will hear a childish whisper which sounds like "Those folks think I'm a monster" at :18 and the audio can be heard HERE.

Much later in the night, with John and Ty in the main living room (near the kitchen, DVR was on floor between kitchen and living room) and Dustin and Chris were in master bedroom, this EVP of very clear footsteps was captured (audio enhanced) which would have had to come from kitchen area where we had previously heard shuffling sounds (this was the only uncarpeted area in the home). The footsteps were clearly heard by John and Ty and even by Chris and Dustin who were down the hallway. The audio of the footsteps can be heard HERE at :14.

Our last (but very good) EVP was captured with the DVR in the hallway; at :20 you'll hear the response to the question which was "have you been scaring her?" (referring to our client resident). Sounds to us like "why don't you leave?" This DVR was in the hallway and the "voice" would've originated from the master bedroom. You can here this EVP right HERE.

This video was captured about midway through the investigation. Our apologies for the quality of the video....our video editor is on the fritz, so to get the audio posted promptly, we had to upload an iphone video of the actual video. At about :03, you'll see a small shadow quickly move in front of Dustin right before he walks through the screen. We were able to determine via other devices in the area that Dustin's shadow was cast on the wall behind him, out of view of the camera. You may have to watch this one a few times to get it (our video guy has a keen eye for these things), but you will see it. The video can be viewed HERE.

This video was captured with no one in the main living room. At :06, you can see the items of clothing which are draped on the couch suddenly change shape as though they were manipulated. Again, the original video was shot with no one in the room, the video you are seeing is an iphone capture of the original video due to technical issues with our video editing software (you are again observing my inability to demonstrate a steady hand with my iphone video). The video can be seen HERE.

We utilize a laser grid to help us determine movement/shadow figures. The basic premise is that when the grid of green dots is broken, something is passing between the source and where the dots are showing. This picture comes from a video still where the grid was broken for a few seconds. We use software that eliminates irregular patterns in the dots and highlights the area in radiating white (the lines were drawn by us to outline the area). According to the landmarks in the picture (including the trim on the walls and the height of the pictures on the wall), this figure seems to be about 3.5 - 4 feet tall. The ONLY way for the laser grid dots to be broken is for a mass to be standing in front of it. Picture of the video still is below. 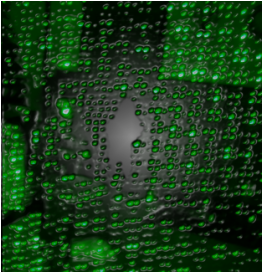 
After experiencing a dry spell of several investigations yielding no paranormal evidence in a row, we figured we were due for one with plenty of evidence and that is what we got with the Bolivar home. It's important to note that at no point did we ever feel threatened or intimidated by the spirits in this home (which we determined to be an elderly male and a young female). The elderly male spirit is consistent with the deceased neighbor where a lot of the items inside the home came from and the client stated that THIS audio sounded like her neighbor used to sound when he would clear his throat constantly. The child spirit is unexplained but the theory is that this is likely a piggyback spirit who has taken up refuge in the home of a caretaker (occupant is a health care worker). After discussing this case with Reverend Crabtree, we advised the client to remove the cedar chest from the home (where most of the activity was collected) to see if the activity subsides. Items such as cedar chests (or "hope chests") are typically emotional items where a spirit may become attached, so we are hoping removing this item will help.