MwGh case 0223
​
Private residence Willard, Missouri
We were asked to do a return visit to this home due to a ramping up of aggressive activity including items being thrown at the residents, laundry being thrown all over a bedroom, voices being heard (even doppleganger voices of the residents themselves when they are not home), a very heavy kitchen table being lifted a few inches then slammed back to the ground, loud knocks on the wall near residents' heads and even items being thrown as projectiles.

We set up digital audio recorders in every room of the home, cameras upstairs (where activity was said to be focused) and used the Franks Box plus EMF detectors (home still shows well insulated electricity). This investigation was performed at the request of the residents due to increasingly aggressive activity.

During the walk-through the residents told us about an issue which happened a few nights earlier where a light was seen coming on in the back bedroom then they discovered that a laundry basket full of folded laundry had been thrown about the room and the bedding had been stripped. During the walk-through we heard distinct noises coming from the basement area. The laundry issue became more important than we planned it would be as the residents left two stacked laundry baskets full of laundry in the bedroom where this issue occurred during our time in the home.
Audio Evidence

Again, we captured a significant amount of audio evidence and scrutinize it heavily so there were several instances where what was very likely significant evidence of paranormal activity was thrown out just simply due to the fact that we may have been careless in "tagging audio" (for instance if someone sneezes or takes a deep breath we tag that on the audio recorder so we don't later confuse it with actual evidence). The examples presented below are absolutely free of any external contamination and are what we consider "paranormal" (or "beyond the normal") and have been scrutinized and reviewed by 3 other paranormal groups for authenticity.

1. This noise was captured by a recorder we placed in the attic. We had never explored the attic but due to reports of some possible sounds coming from that area, we placed a recorder there unsupervised for the entireity of this investigation. It's important to note that there was no obvious access points to the outside in the attic and no evidence of rodents or other pests in the attic itself.

2. Here you will hear a very prominent child's voice at :05 and :10 which wasn't heard at the time of by the investigators.

3. With this audio clip at :11-:12 you'll hear a voice that wasn't heard at the time of the recording. What is said has been debated. The majority think it says "seven days" but that's up for debate.
4. Below you will see the initial photo we took of the master bedroom focusing on the laundry baskets in the corner (notice that the top baskets' contents are actually propped up against the wall and remained stable for hours during the investigation). 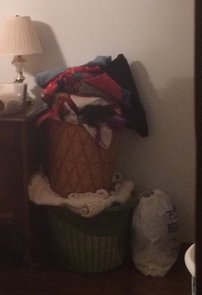 5. Below you can see the "after" picture where the basket of laundry spontaneously turned itself over and spilled onto the floor in a very similar way the homeowners had told us it happened only 2 days earlier. 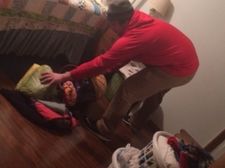 6. We had a video camera in the next room recording when this occurred and you can watch that video HERE. If you listen very closely you can hear a second set of footsteps during the video (excuse the language, this is raw, unedited audio captured by the video camera in the adjacent room). The basket falls over at :09 in this video clip.
Conclusions
Unfortunately we didn't get the smoking gun piece of evidence that would explain why this late 70's build home with no prior history would have such signifant activity. Even the local police department is aware of the activity in this home and at least one officer refuses to re-enter the home. We are comfortable saying that this home is positive for aggressive paranormal activity and will continue to work with the residents to try to figure out a reason why. We were excited at the activity we experienced but disappointed that we aren't yet able to provide concrete answers as to why this family continues to be plagued by activity. We are currently corresponding with 3 other paranormal groups to figure out a plan to at least quiet if not resolve the activity in this home.
Powered by