MwGh case 0981
​
Private residence Willard, Missouri
This walkout basement home features 3 beds,  2 full baths  1,748 square feet of living space and was constructed in 1977. The owners of this home have experienced whispers, shadow figures, footsteps, full bodied apparitions and even severe kinetic paranormal issues such as the kitchen table being lifted and slammed back to the ground, heavy kitchen chairs being turned over in full view, the sliding glass door opening and closing and the kitchen cabinets and oven door all suddenly opening at the same time. Lamps have been broken, a cry for help has been heard and even the local police have visited frequently also experiencing the same issues.

This home is situated in a rural setting with no outstanding records of significant crimes or traumatic deaths in the recent past. It’s  important to note that this homeowner has experienced paranormal activity in a prior where they lived in Illinois before moving to this residence.

More than 22 total hours of audio, video and photos were captured during the investigation. Every room in the home was investigated with recorders in every room upstairs and in the living spaces downstairs. We utilized 8 audio recorders and camera, EMF detectors, laser grid and Frank's Box during this investigation.

We started experiencing paranormal activity in this home even before we had or equipment set up and ready. While installing new batteries in all equipment, Dustin noticed a deck of playing cards sitting on the kitchen counter. Just as a test, he arranged 4 cards towards the edge of the counter with plans on later asking any entity present to knock the cards off. Here is a pic of the original setup of the cards, unfortunately its a still from a sweeping video (not knowing we needed to document the cards positioning yet), but you can zoom in and clearly see the cards are all face up. Picture is below 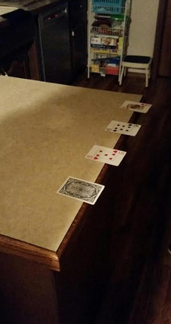 ​We probably had our backs to the cards for only a minute then when we turned back around, the first card had been flipped over perfectly. These two images were taken from opposite ends but you can clearly see that all cards are face up in the first pic then when this one was taken, the first card has been turned over without even asking for any entities present to manipulate them. Only two investigators were in that area at the time and neither of them touched the cards after they had been initially placed so we knew we were going to have an active night at this house.
Video Evidence

This investigation was one of those rarities where once we started going through the audio, we caught so much that we decided just to pick the best of the best to publish publicly. If we would've included every footstep, knock, breath or muttered sound it all would've been washed out. So we picked the very best of them and have included them below. As for video, we got a few possible hits, but one in particular stood out as peculiar. It occurred with the video camera facing from the kitchen toward the hallway and we caught a shadow manifestation in the area between the living room and hallway. You'll see it on the shadow appear on the darker wall adjacent to the office and it moves toward the ceiling; we also can't explain the clicking sounds the camera makes when shadow appears, it sounds like the camera is attempting to malfunction. Video is below.

In the video above you can see the shadow move toward the ceiling and disappear.

We captured such a huge volume of audio evidence, posting every knock and breath on here would take forever so we trimmed them down to the very best ones which are listed below. These were captured from various different recorders in different rooms of the house.

1. This noise was captured with no one in the house, all investigators were outside during this time. You'll hear a thump noise at :04 then what almost sounds like a child vocal after that.

2. With this clip, you'll hear John talking about hearing a breath then at :06 you will hear the breath sound again louder.

3. Here, you will hear Dustin in the background in a different room ask why the entity is bothering the kids and John says "what is your name by the way". The whisper audio starts around :07 and the voice sounds close to this recorder which was in a different room than the investigators.

4. This one is super clear and was captured during a break with no investigators inside the home. It has been enhanced for clarity. Rest in peace?

5. With this EVP, captured on an iphone recorder, Chris and Tyler are in the basement, . You'll hear Chris say "knock like this" then you'll hear what sounds like "say it".

6. At :05 on this EVP, after the second knock, you'll hear a voice in the background say what sounds like "if you get out of here alive". Might require headphones, but it is there.

7. On this one, Chris and Tyler are talking about a noise they heard and Chris says "not growling, but whining" referring to the sound and at :06 you'll hear what sounds like a screech sound coming from the room down the hall where this recorder was placed. And we've heard this EXACT screeching sound coming from inside another investigation we did in Willard a few years ago.

All investigators had personal experiences in this home which were unable to be documented by audio or camera. At one point while Chris and Ty were investigating in the basement, a small object come flying out of the storage room and landed on the floor about 5 feet in front of us. We went inside and nothing or no one was inside the room. All investigators heard footsteps, a sound that sounded like a child and even a sound that sounded like a whining dog.

This home is definitely experiencing aggressive activity from likely multiple entities. The home has never had a recorded past of crime or violence and no signs of activity such as ouija board use which would possibly invite such activity. This case remains open and we are going to perform a second investigation with some of the family members present to try to provoke whatever is there to try to get more answers. As for right now, all we can say that is that it is definitely "haunted".